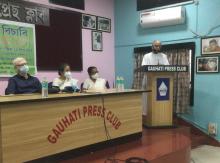 24 Oct 2021 - 12:05pm | CM Paul
Guwahati, 22 October 2021: A group of academicians and social activists came together under the leadership of the archbishop emeritus of Guwahati to promote peace at a time when the whole of...