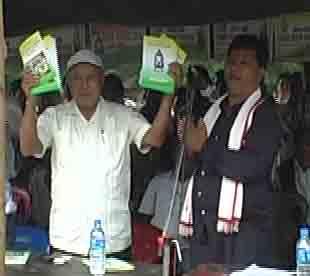 S K Biuisumutiary, MP released the election manifesto of Dima Hasao Dol in a public meeting held at the playground of Diyungbra Jalairaoni Hosom  in presence of huge gatherings on Monday.

MP while releasing the manifest of the Dima Hasao Dol appealed to the people of Diyungbra constituency to extend their whole hearted support to the Dima Hasao Dol candidate Sri Dilip Nunisa wherein DHD(J) C-in-C Niranjan Hojai and Mayanan Kemprai are contesting as independent and Congress candidates.

Speaking on the occasion Bahim Langthasa also put forward his opinion in favour of Dima Hasao Dol and appealed to the people of Diyungbra to support Dilip Nunisa so that a change could be brought in near future.

Several hundreds of people from various communities of Harangajao in Dima Hasao took out rally at Harangajao on Monday.

This was an election rally organized in favour of Sri Amendu Hojai, an independent candidate from 23 Harangajao constituency of N C Hill Autonomous Council.

The procession started from Dima Hasao Dol office marched through the major parts of Harangajao concluded at Community Hall.

This was followed by a well attended meeting held in connection with the election to the 11th N C Hill Autonomous Council scheduled to be held on May 20th next.

All the speakers tried their level best to convince the people and appealed to support Sri Hojai.

Talking to the media people of Harangajao expressed their desire to extend their support to Sri Hojai as all the previous leaders never paid any attention to Harangajao though there were MP, MLA and CEM from this place only.

P Jidung, a prominent citizen of Harangajao while talking to this correspondent said since long even my father had been supporting the congress but most of the previous leaders irrespective of party affiliation did nothing for the development of Harangajao circle. He confidently said this time he will be supporting the new candidate not the old one.

Smt P Hrankhol, a women activist of Harangajao said Harangajao circle, the most backward area of the district was ever neglected area since the leaders from this place often forget them just after coming to the power. She said the people of Harangajao are suffering a lot due to lack of medical facilities, road communication, education etc since long but the leaders often make promises before the election but forgets just after the election is over. Therefore, this time, they are not going to commit any mistake in choosing their leaders.

30 Jan 2021 - 6:17pm | AT News
When we look upon the Martyrdom Day of Mahatma Gandhi, we find a dead human body only, the attire of Mahatma. In true sense Gandhi is immortal – who is living in the minds of million and million of...

13 Nov 2008 - 10:09pm | editor
A special investigation team set up by the Assam police to probe the serial blast on Thursday brought two NDFB cadres to Guwahati after they were picked from the Borbori based camp in Bagsa district...

6 Jul 2017 - 5:07am | AT News
In a bid to bring awareness on various career options and opportunities, Utopian Academy at Silapathar organised a day-long career awareness programme for its students on Wednesday. The programme was...