Festive mood grips Assam as people across the state are celebrating the much vaunted Bhugali Bihu with much fanfare and extravaganza. The bihu began with the kindling of the meji at the break of the night to worship the fire god. Several sports and cultural programs are also being organised to mark the occasion. Despite stioff resistance by a section NGOs buffalo fights are reported from some rural area. Hajo, known for its fight of nightingale is all abuzz.

Monday evening was the time for feast. Community feasts were organised by the people of all sections which lasted till midnight. Assam governor Lt Gen Retd Ajoy Kumar Singh, Assam Chief Minister Tarun Gogoi have greeted the people on the occasion. In their messages they hoped that the bonfire will remove from admid the Assamese society all the past evils. 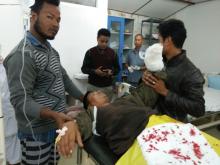