A hardcore ULFA militant surrendered before the superintendent of police in Jorhat district on Monday.

Identified as Jagat Bhuyan alias Madan, he surrendered before Sanjukta Parashar with a M-20 rifle, seven rounds of ammunition and two Chinese made bottle grenades. He had joined the outfit in 2009. 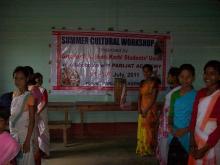 6 Jul 2011 - 1:45pm | editor
Summer Cultural Workshop is going on from July 1. The worskhop is organising by Greater Guwahati Karbi Students' Union in collaboration with Parijat Academy. More than 100 children...