A businessman commits suicide in Guwahati after he was upset with business. Identified as S Malow, the gold trader committed suicide a day after gold prices hit 15-month low.
He was found dead at his residence in Paltanbazar.

20 Oct 2014 - 8:02am | AT News
Karbi Anglong district braces up for an 1,000 hour bandh from October 27.  The Joint Action Committee for Autonomous State (JACAS) has called for the an unprecedented bandh from 5 in the morning... 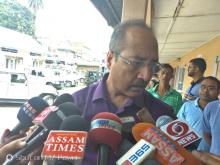