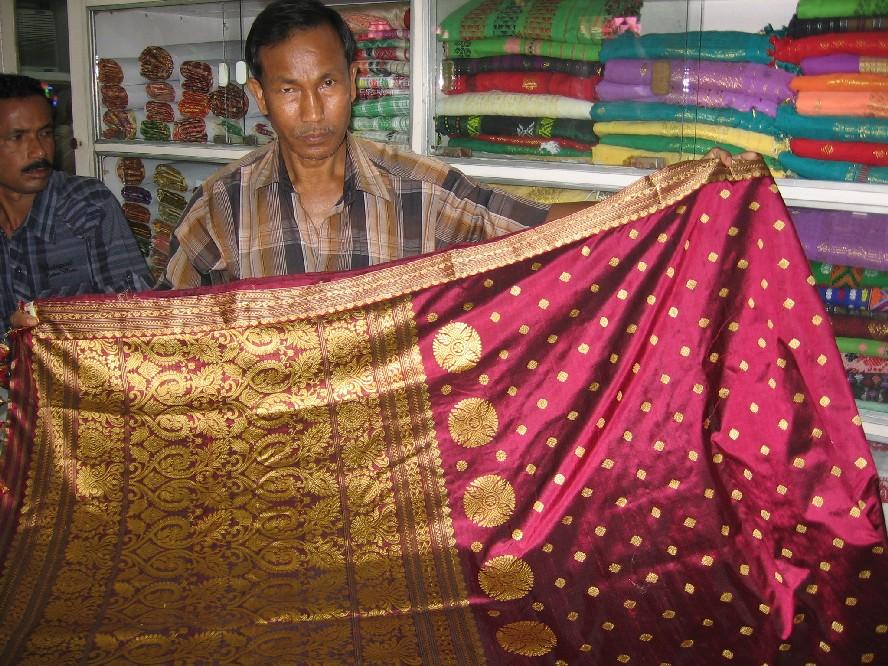 Rongali Bihu is round the corner and so is the rush of customers in the markets and shopping complexes across the city. The rush of people buying new clothes for them and their loved ones is increasing every day but unfazed by the tirade of weavers of Sualkuchi, the synthetic fibre mekhela chadar is still selling like hot cakes in the city markets.

Garments traders dealing with the mekhela chadars in the city feels synthetic fiber mekhela chadars embroidered with local designs has their separate identity and they are in no way hampering the prospect of traditional paat (silk) textiles of Sualkuchi.

Baba Kalita, a weaver in Sualkuchi told this correspondent that movement against the Banarasi silk Sualkuchi was the need of the hour but now the people of the state should also focus on how to bring to an end the practice of using local designs in clothes imported from states like Gujarat and Maharashtra.

“People are buying the imported synthetic mekhela chadars as they are getting the local designs in them that too at low cost. The only way the popularity of these mekhela chadars can be brought down if the practice of use of local design is stopped,” Kalita, who is in this business for the last fifteen years said.

Local designs like magar, dhol, pepa and others are extensively used in the imported cloth to attract buyers, another weaver of Sualkuchi Nandan Kakoti said.

Kakoti said there is a nexus of some Guwahati based garment traders and some Sualkuchi businessmen who are making these designs available outside the state.

“If these designs continue to appear in the imported synthetic makhala chadars sooner or later people of the state themselves will forget that these are our own designs. The state government should take this matter seriously and if possible should compel the imported mekhela chadar manufactures to give royalty to local designers for using their designs,” Kakoti said.

Ratan Sharma, a Guwahati based trader dealing with the synthetic chadar mekhelas admitted that some of the imported cloths are embroidered with local designs in the city itself while rest comes from cities like Surat and Mumbai directly.

If many customers are going for the fancy low cost synthetic chadar mekhelas but the ones who are thinking of buying the original stuff this festive season are facing the dilemma whether to go for it or not after Sualkuchi incident.

“I was thinking of buying my mother a paat mekhela chadar this festive season but now I am having second thoughts whether the material available in the market is original or not,” said Nilakshi Konwar, a management executive with the Hindustan Paper Mill.

According to the sale staff of Silkalaya (a showroom in the city which deals in traditional Assamese dresses) sale of paat fiber items in their showroom has not been affected post Sualkuchi incident but they are now compelled to work that extra hard to convinced the people on the genuineness of the product.

“We have a good reputation in the market and earlier people hardly questioned the genuineness of the product we sell but now we facing an array of questions from customers wanting to buy items from us,” said Kishor Nath, a senior sale staff of Silkalaya.

8 Feb 2014 - 3:55pm | AT News
BJP’s prime ministerial candidate Narendra Modi on Saturday deplored that lack of vision and an able leadership have been preventing Assam from developing on all fronts.Addressing a huge rally in...