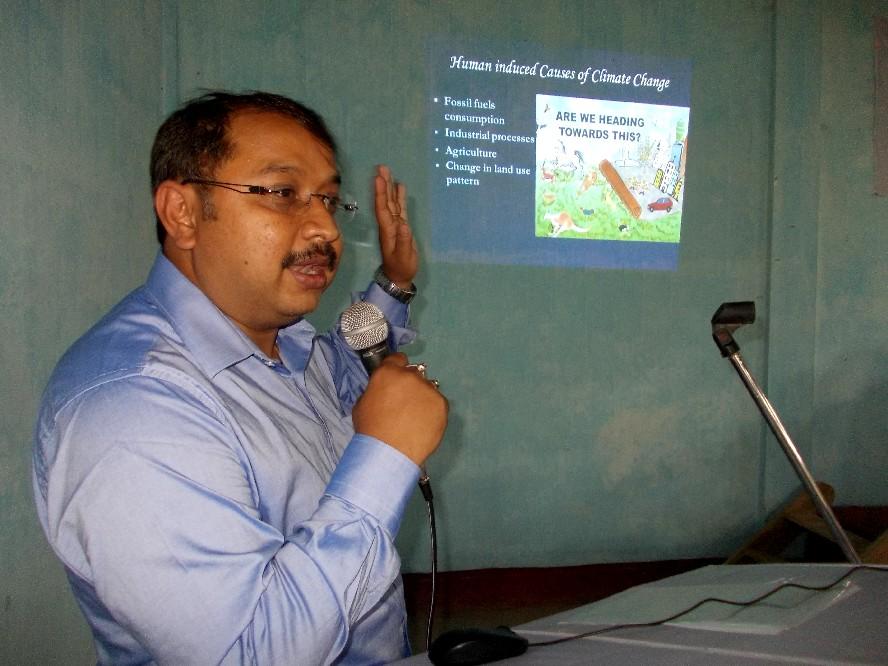 An open discussion was held at Tangla recently on March 25 to discuss impact of climate change on rural population and the need for creating awareness among masses on the issue. The meet also discussed problems of conservation of nature and wildlife in Udalguri district with special reference to man-elephant conflict.The discussion was organized at Ramesh Chandra Saharia Teachers' Training College,Tangla by noted social worker and former civil service officer Dr.Dipankar Saharia (son of former Assam minister late R.C Saharia) on the occasion of distribution of financial grants to eleven DNA clubs of Udalguri district. Several distinguished scholars,educationalists,teachers, social workers and media personnels from Kalaigaon, Tangla,Bhergaon,Khoirabari etc participated in the discussion.

Speaking on climate change and its impact on rural population Dr.Saharia described role of common people. In simple words he explained how small matters like un necessary use of plastics or polythene could cause global warming.He also suggested plantation of trees socially or individually for economic growth and in checking global warming and climate change. According to him rich natural resources of the country and its immense potential for future development were in the hands of the school children of the country. There had been increasing realization that unless school children were made aware of their own resources and present trend of its conservation and management, it would not be possible for future sustainable development. He remarked that DNA clubs had been established in the country by Department of Bio-technology to impart technical knowledge to school children. Jayanta Kumar Das,Wildlife Warden of Udalguri district spoke on conservation of nature and wildlife with special reference to man-elephant conflict. According to him destruction of age old Samrang elephant corridor and all PRFs (proposed Reserve Forests) namely Neewly and Kundarbil had caused severe man-elephant conflict in Udalguri district. He strongly criticised the revenue departments failure to update gazette notifications in time. “Had the notification been updated in time, forest lands could have been protected”,he remarked. Taking advantage of non update of PRFs ,a section of revenue officers and employees allotted forest lands to people in return of money, causing present man-elephant conflict in Udalguri which had taken lives of 12 people and 8 wild elephants in 2012 alone beside injury to 16 people.

Pall of gloom in IIT, Guwahati

19 Jun 2010 - 2:12pm | editor
In a major achivement city police have arrested 3 persons who have confessed the killing of engineer Manik Baishya on Thursday in Guwahati. During interrogation they confessed before police that they...