Cyclist of Nazia Anil Mahanta is attemping to enter Guinness World Record of short lapes 660 meter in cycling in 48 hours on the bank of the Barbaruah Tank, Nazira. This has started from last March 8.  Several hundrads people has been gathering at the venue to encourage and witness the historic cycling events.The programme is organise by the Nazira Cycling Association in association with the civil administration of Nazira. 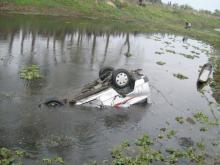 25 Feb 2008 - 4:34am | editor
Two people dead and nine others have been seriously injured when a Tata Sumo in which they were travelling fell into a deep pond in Jengrai in Majuli on Monday morning. According to information, the...

Sanis gets fresh lease of life

19 Jan 2018 - 7:15pm | AT News
Wokha: Sanis SDO (Civil) Headquarters in Wokha district is now ADC Headquarters which is said to be a long-cherished dream of the people of the district. In his address after the ceremonial opening...