The police has arrested top ranked AANLA leader Rupen Lakra during an operation in Bokajan in Karbi Anglong district on Wedenesday. The police further claimed that Rupen was in charge of Karbi Anglong district. The police dug a portion of Baghjan field and recovered a huge cache of arms and ammunition. These include three AK-47 Rifles, two .31 rifles, 20 US carbine, Twenty five .351 bullets, 70 rounds of 9 9mm bullets, 155 rounds of AK-47 rifle bullets, 3 grenades, 6 hand grenades, one N-16 rifle, 4 highly explosive bombs, one grenade launcher besides an AK-47 magzine.

26 Apr 2012 - 7:34pm | editor
At least two people were killed and 25 others were injured in a road mishap in Barpeta district on Wednesday midnight. The incident took place at Garhchuk near Bajali when a wedding bus skidded... 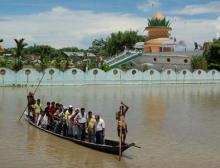