Guwahati police claimed to have arrested a gang of notorious kidnappers I connection with the kidnap of a Guwahati-based hotelier’s son two months ago.

Police on Saturday night arrested five persons including a woman from Silchar who kidnapped the son of a businessman  from Sonapur in November and demanded Rs 1 crore for safe release. Later they freed the boy for  Rs 50 lakh as ransom. The women prepared the entire blueprint. Interrogation is going on at Panbazar police station. 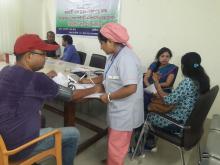 1 Aug 2008 - 3:30am | editor
The Central Bureau of Investigation on Thursday filed a charge sheet against sacked Assam Education Minister Ripun Bora, arrested along with two others for allegedly offering a bribe of Rs 17 lakh to...