ULFA’s anti talk faction on Tuesday claimed the responsibility of the attack at a police station in Sonari where a policeman was injured and several vehicles have been damaged on Monday midnight.
In a statement ULFA’s publicity wing said that it was launched to retaliate the killing of the innocent youth in Tinsukia district in the name of encounter with ULFA.
Policemen Lila Chetia was later shifted to hospital and his condition is stable. Security forces rushed to the spot and a combing operation is going on. But the militants are believed to have left for the neighbouring Nagaland. 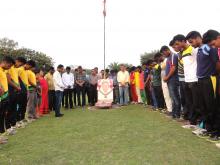 6 Mar 2008 - 12:27pm | editor
A Central Bureau of Investigation team has started its probe the killing of FCI's North east regional executive director P C Ram in Changsari. According to information, the officials of the...