Security forces claimed to have killed an ULFA militant in Tinsukia district  on Saturday. Identified as Lalit Moran, the local youth was suspected to be a militant belonging to the anti-talk faction during a joint operation launched by the Army and police in Duwarmara jungle.

Army and police had launched the operation after getting intelligence input regarding the presence of a group of armed men in the area.
But a section of local resident alleged it a fake encounter where the innocent youth was killed.

20 Jul 2021 - 7:28pm | Babul Gogoi
The increase in tiger population in the Manas National Park is a milestone in country-wide tiger conservation efforts. Since peace returned to Manas after a prolonged insurgency, dedicated...

Rajasthan police find no link between blast in Jaipur Guwahati

11 Nov 2008 - 2:49pm | editor
The Rajasthan police have denied link between the serial blast in Guwahati and Jaipur. After a careful on the spot study in Guwahati, they are confirm that no link could be established between the... 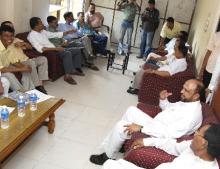 5 May 2008 - 8:35pm | editor
The unification of Assam’s regional parties have reached a crucial stage with the Asom Gana Parishad is hunkering down with three of its breakaway groups at its party headquarters on Monday....