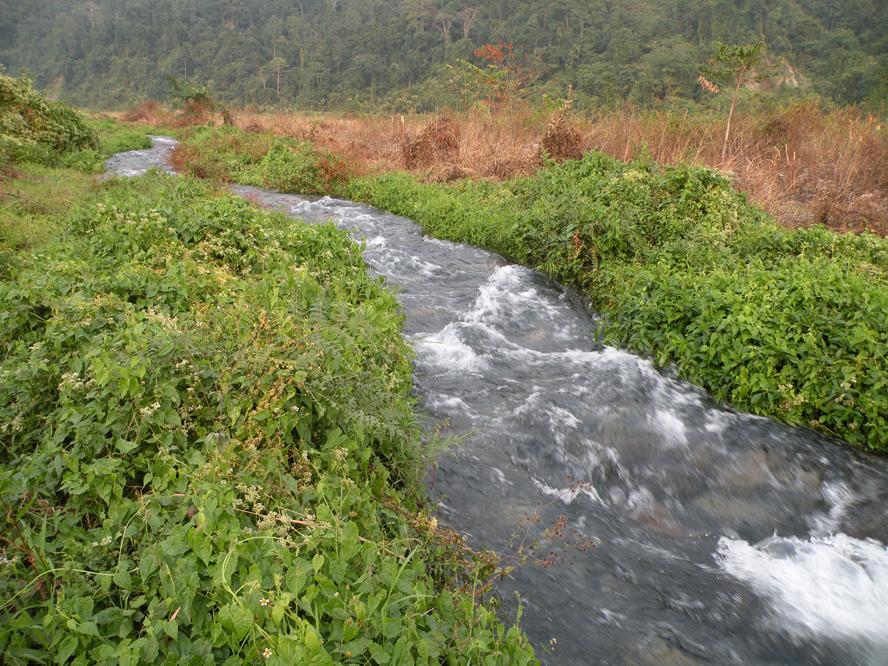 The pristine and enchanting forests and tourist spots of Udalguri district, touching 53 KM long India-Bhutan international border and 27 KM long Assam-Arunachal inter state border have always been great attractions for tourists and nature loving people of India. It needs mention that Udalguri is the only district in Assam beside Kokrajhar, Cachar and Dhuburi sharing both international and inter state border. The trouble-torned district has great potential in tourism sector with development of its infrastructure. Poor transport and communication system has posed as the biggest hurdle on the way of its growth. Poor economic condition of people have virtually given birth to several insurgent groups in the district. Proper publicity and infrastructure development could easily draw the attention of tourists all over the world there by improving economic condition of the people. roblems like “Man-elephant conflict” in the district causing deaths of 8 wild elephants and 11 human beings during months of 2012 only. In this article I shall try to give some information of a few forests and natural hot spots of the district.

Khalingduar Reserve Forest (70 KM from Mangaldai via Kalaigaon-Tangla-Paneri-Bhutiachang ): Name of this RF is enough for its real identity. Actually this RF has been the gateway to Khaling Wild life Sanctuary of Bhutan.So Khalingduar means door to Khaling WLS of Bhutan. The RF is under Dhansiri Forest Division, Udalguri and has been spreading on either sides of India-Bhutan international border for 12 KM. Situated on the remote Indo-Bhutan international border, Khalingduar RF (Reserve Forest) under Dhansiri Forest Division, Udalguri (location -26 52' 14E and 91 53' 01E/elevation 270 M from sea level ) has always been a unique virgin beauty of nature. British government declared it as a reserve forest on 28 January in 1874. With an area of 7033 hectares, Khalingduar is the abode of many rare species of flora and fauna and really deserves a berth next to none in the field of biodiversity. The important animals which can be seen in the RF are elephant, marble cat (a rare species of wild cat), tigers wild buffalo, bison, common languor, wild dog, barking deer, spotted deer, hog deer, chital, hyena, wild pig and common fox. Among birds, horn bills and peacocks are important. Kuha Ban, a different types of grass could be seen on either side of the Nonoi river. The infrastructure inside the RF if developed, would attract tourists to Jalimukh, Samrang and Koramore. The distance between Jalimukh (inside Bhutan) and Nonoi Range office is just 12 km. The British built big water reservoirs and water pipe line (flowing water from Jalimukh to various tea gardens) well inside the RF has been casing water logging on parts of the only link to Jalimukh disrupting normal movement. It was also learned that the short cut forest road well inside deep forests, connecting Jalimukh and Samrang has now been covered with grasses. If the forest road was opened, it could have been used as an adventure safari for the tourists. Another 6 km long forest road from Samrang to Bangurum has been damaged,if repaired, visitors would be able to make a complete tour of the RF.

Far away from human hue and cry, the journey to Jalimukh is an adventure with trill. The place is unique in character. The most adventurous part of the journey has been the 10 km portion from Nonoi Forest Range Office to Jalimukh, which takes one through dark and deep forests with all the tall trees and creepers. sometimes blocked by fallen trees. If lady luck smiles, one can expect to see wild animals too. Small streams with ice cold waters on all the way to Jalimukh is really refreshing.

Unabated felling of trees, small numbers of forest staff for a large area, encroachment by tea gardens, grazing of thousands of domestic cattle inside the RF has been posing serious setback to both flora and fauna of this RF. The three PRFs (Proposed Reserve Forest ) under Nonoi range namely, Newlee, Kundarbill 2nd and 3rd edition attached to Khalingdar RF have never been declared as RF for decades resulting in heavy damages to the RF. Thousands of hectares of land belonging to these PRF have already been encroached by tea gardens and people.

Fortunately a group of educated youths of Nonai had formed an environmental NGO (Green Valley Forest and Wildlife protection Society) and started voluntary conservation activities in the RF in association with forest department. They have been of much help to forest department in checking poaching and illegal felling of trees.

Bornadi Wildlife Sanctuary (65 KM from Mangaldai via Kalaigaon-Tangla-Paneri- Dimakuchi-Suklai ): Situated in the foot hills of Himalayas, bordering Bhutan in the North of Udalguri district, Barnadi Wildlife Sanctuary ( 260 46” 49’ N and 910 45” 31’E at the elevation of 175 M above sea level )with an area of 28.22 sq km could well have attracted large number of inland and foreign tourists for its exotic virgin beauty. This sanctuary was declared as a reserve forest in 1942 and Wildlife Sanctuary in 1980. The spectacular landscape of this small but important protected area is unique. Pygmy Hog, Elephant, Gaur or Indian Bison, Slow Loris, Tiger, Leopard, Capped Langur, Sambar, Barking Deer, Hog Deer, Dhole, Peacoak, Hispid Hare, Himalayan Black Bear, Wild Bore, Pangolin, Flying Squirrel, Assamese macaque, Peacocks, Eurasian otter, fishing cat and Porcupine and 4 species of Horn bills are the main attractions of this WLS. It has been famous as the only known abode of Pygmy Hog (sus salvinous)and Hispid Hare (caprolagus hispid). Severe biotic interference, inadequate infrastructure, inadequate man power, lack of awareness among local people, encroachment of forest lands, lack of proper communication systems etc have posed serious threat to the sanctuary. It is a matter of regret that no tourists visit the sanctuary now a days. Massive destruction of forest during 1980 to 2003 have nearly turned the WLS in to a lifeless forest. Pygmy Hog was last seen in 1984,but nature loving people still believe that it could be traced with systemic survey.

Bhairabkunda (20 KM from Udalguri town): Situated on India-Bhutan international border, Bhairabkunda is known as a picnic hot spot for its unmatched scenic beauty since long back. Thousands of nature loving people visit Bhairabkunda every year to share romantic moments with nature. Perhaps time itself dances in the tune of fast flowing roaring waves of Dhansiri river. The sequences of Assamese film “Aranya” directed by noted film maker Samarendra Narayan Deb is still fresh in our mind. People could also taste the hilly fishes of Dhansiri river. Walking along the streets of Daifam, a small Bhutan township is worth remembering. One can easily experience the thrill of visiting a foreign country without passport or visas. With the construction of Dhansiri Irrigation Project (inside India), Bhairabkunda now is a small town having many government offices. A tourist lodge has also been constructed at Bhairabkunda for tourists. Famous 'Bharibkunda Festival' is an additional attraction during January every year.

JFMC Forest, Sapangaon, (15 KM from Udalguri town): In a development that hold hopes for long term conservation amid the gloom of large scale deforestation in Assam specially in Udalguri district, villagers of six villages on the India-Bhutan border at Bhairabkunda joined hands with the Forest Department in successfully regenerating a stretch of barren sandy forest land. The results of this quiet community initiative done under joint forest management (JFM) are evident with the regenerated forest expanse of 5 sq KM already emerging as a shelter of wild animals and birds. The 22.24 sq KM Bhairabkunda Reserve Forest (RF)was left without a single tree by the early 1980s due to rampant illegal logging. Aforestation drive by forest Deptt. in association of people of six villages namely- Sonaigaon, Goroimari, Bhairabkunda, Sapangaon,No.1 Mazargaon and No.2 Mazargaon started in 2007-08 and within five years a spectacular man made forest known as JFMC forest has grown up at Sapangaon by converting plot of barren sandy lands measuring 500 hectare (5 sq KM) in to a new picturesque forest by planting khoir, gomari, simul, shisum etc near Dhansiri river,very close to Bhutan and Arunachal.

Conservation activists hoped that the place would draw the attention of tourists all over the world,if government developed infrastructure of the area. The regenerated forest land now has rich vegetation and has given shelter to wild elephants, deer, monkeys,leopard,bears etc beside various species of flora.A small river with several canals -a few of those man made runs throughout the forest ,providing replenishment for the green cover.

Nature loving office bearers of the JFMC,namely Esmail Daimari,Rupchand Daimari etc believe that with some support from Bodoland Territorial Council (BTC) the area can be developed as an ideal eco- tourism hub. With rivers criss-crossing the verdant Assam-Bhutan-Arunachal border and the Bhairabkunda Reserve Forest providing some undulating trekking trails, there is a definite scope scope for promoting tourism. Although the forest has been recognized as an ideal place for shooting of films or documentaries etc, but infrastructure bottlenecks like absence of light, toilet or accommodation etc have compelled producers or interested persons to go to other locations. Nature loving people of Udalguri including members of the JFMC hope that, BTC authority, district administration, forest department and Indian Army would come forward for the installation of Solar panels along with accommodation and sanitation facilities in the greater interest of eco-tourism prospect in the district.

Bogamati (70 KM from Mangaldai-Kalaigaon-Tangla-Paneri-Dimakuchi-Suklai): Bogamati is situated on the eastern side of Bornadi river, on Udalguri-Bagsa border. It is under Bornadi Wildlife Sanctuary of Dhansiri Forest Division,Udalguri (Udalguri district) It is one of the latest picnic hot spot of Assam. Till 2003 it had been the unofficial HQ of ULFA. But situation has changed and Bogamati is now open to all. The Crystal clear sallow water of Bornadi river equipped with water recreation facilities like rafting, rock climbing etc are of great attraction to visitors now.

Koramore (Kherkheria) (65 KM from Mangaldai-Kalaigaon-Harisinga): Tea garden on the top of foot hills of Bhutan? Yes Very attractive place since long back. On the western side Bhola Nadi and in eastern side Lakhi Nadi, Koramore is famous for Koramore tea garden. One can easily enter into the hilly terrains and river mouths of so many rivers. Best for trekking. The Sunset scene at Koramore is breathtaking indeed.

5 Mar 2010 - 8:30pm | bishwajeetsinha
The mobile theatre troupes are now only entertaining urban crowds but they are immense popular in remote sub-urban towns, taluka etc. As they are not having opportunity to enjoy each prominent...

7 May 2017 - 7:05pm | Shajid Khan
In a goodwill initiative of the BTC authority and upholding one of its pre-poll promise. Meritious  girl students of underpriviliged BPL class  who cleared +2 Exams last year were awarded...