Nayak Subedar Manoj Kumar Das (35) of Hatigarh army camp has been killed by a wild elephant inside the army camp on November 8. According to information he was attacked by a wild elephant at 5.30 am while he had been performing morning duty along with other jawans. He had been rushed to Hatigarh Brigade Hospital where he breathed his last at 8 am. The killed army man belonged to Bidyapur village of Burdhwan in West Bengal. 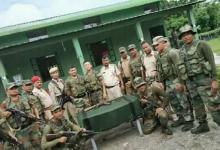 29 Mar 2014 - 9:08pm | AT News
Apprehending law and order breakdown after the sensational rape and murder of a tribal girl in Boldia gaon, the Chirang district administration has clamped curfew on Saturday.The curfew in the entire...

17 Sep 2015 - 9:04am | AT News
An elephant and its driver were killed when a truck rammed into the animal on which three people were travelling on the national highway in Khetri area on Thursday. The tragic incident took place in...