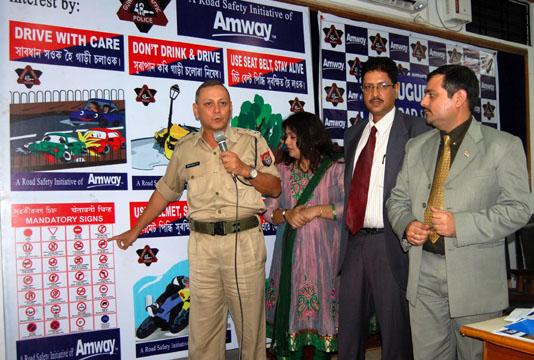 Amway India and Guwahati Traffic Police have joined hands together to announce a ‘Road safety awareness campaign’ for the festive season in Guwahati city on October 18, 2012. The objective of the initiative is to sensitize the denizens of the city about the importance of adherence to a slew of road safety rules and traffic signals in order to avoid accidents and secure long life. The awareness drive specially focuses on the students across schools and colleges of Guwahati with an objective of educating the youth on traffic rules for a better future.

At a formal function at Guwahati Press Club, the Superintendent of Police, Traffic Guwahati, Bibekananda Das and Amway India’s Area Manager (Northeast) Bickramjit Paul, unveiled a host of colorful posters, signage and hoardings with pictorial illustrations communicating a set of information and instructions on road safety.

The campaign would witness 500 signage across the city of Guwahati during the festive season depicting a host of do’s and don’ts for vehicle owners and pedestrians. The colorful signages are developed with different themes like ‘Drive with Care’, ‘Don’t Drink & Drive’, ‘Use Helmet, Stay Alive’, ‘Don’t Use Phone while riding’ and ‘Use seat belt and stay alive’. The objective of designing the signage is to draw the attention of citizens towards road safety.

While unveiling the initiative, SP, Traffic, Bibekananda Das reiterated on the need to intensify such awareness drive so that the pedestrians and vehicle drivers become responsible while negotiating the road and driving. He said that during last few years the numbers of accidents have increased tremendously due to ignoring traffic rules. This can be controlled by obeying traffic rules only.

Amway India Area manager, Bickramjit Paul commented “we feel privileged to be a part of the festive road safety awareness drive in collaboration with Traffic Police of Guwahati city. The road accidents in the city are on the rise due to reckless driving and it is imperative for us to come forward as a responsible corporate and to partner in the initiative by Guwahati Traffic Police. We would be glad to be associated in more such initiatives for a safer Guwahati.”

This project is executed as a part of the safety initiative of Amway under which the company is partnering with the police department of different cities all across India. This project is expected to draw the attention of public specially youth during the festive season.

6 Jan 2019 - 5:37pm | AT Kokrajhar Bureau
Chief Minister Sarbananda Sonowal laid the foundation stone for construction of Kokrajhar Medical College and Hospital(KMCH) at Beswargaon near Debargaon in Kokrajhar on Sunday in the presence of...

29 Apr 2013 - 10:08am | Ajoy Warisa
The congress youth wing leader, Jivraj Daulagupu, on being denied the party ticket, has resigned from congress to contest the forthcoming 11th N.C Hills Autonomous Council election as an independent...