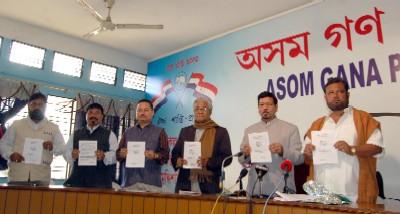 The Opposition Asom Gana Parishad has promised to change the face of rural Assam with thrust on roads, health, drinking water, electricity, education etc if it is voted in the upcoming panchayat polls. In its panchayat poll manifesto released in the city on Wednesday, party president Brindabon Goswami said, they will ensure decentralisation of powers in the panchayat system to implement developmental schemes through rural bodies.

Goswami observed that his party stresses overall development with decentralisation of power in federal structure. He further said with his efficient elected representatives in the rural areas, the party will make the entire panchayat system more effective.

8 Jul 2016 - 1:23pm | Sasanka Talukdar
A local girl from Bajali in Barpeta district fetches no less pride for Assam when she proficiency medal in Physics from Kanpur IIT. She is none other than Barnali Das,  a resident of Sariha...