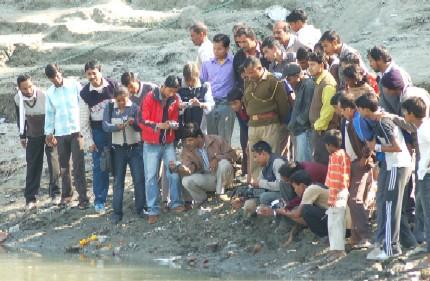 Hundreds of fish were found dead in Kacharighat last morning in mysterious circumstances. The fish’s watery grave in a pool which is separated from the Brahmaputra by a sandbar is the immersion area of local puja idols became a haunt of curious onlookers as the news of the dead fish spread.

The incident came into focus after some local residents observed the dead fish in the otherwise clear water of the pool. And an equal number of sick fishes were also observed fighting for life in the shallow waters near the river bank.

Members of the Pollution Control Board, Assam (PCBA) rushed to the spot and began the preliminary investigations regarding the mass deaths. Deepak Barua, Deputy analyst of the Pollution Board stated that the fish might have died due to the reduction in the level of dissolved oxygen in the water. Though he also stated that “..there is little chance of a drop in the dissolved oxygen level in the river like the Brahmaputra, the chances are that the organic load and toxic substances in the particular pool might have reduced the level.”.

Meanwhile, the local residents are speculating that the mass death may be an ominous sign of some impending natural calamity, while many are suspecting it to be a handiwork of unscrupulous fisherman in the lookout of some fast buck by poisoning the waters. In some villages it is a common practice to poison the waters especially in winter when the water level goes down.

However, Sub Divisional Officer (Sadar), Kamrup (Metro), CK Bhuyan assured that the administration had asked the PCBA, Forensic laboratory, Guwahati Municipal Corporation and the Directorate of Fisheries to investigate the reasons leading to the mysterious situation. Water samples and other evidences have been already collected and sent for forensic investigations.

Mentionably, the PCBA had been requesting the administration to take action regarding the diminishing of the level of pollution in the water by making pollution guidelines mandatory. In view of the latest developments regarding the death of a variety of fish in Kachari ghat the district administration has asked the people to refrain from consuming fish till the cause of the deaths are ascertained.

Repolling in 6 booths in Tripura