Ajmal Foundation has shown its gesture for some affected journalists of Assam. Under its Ajmal Media Welfare Scheme, the foundation has offered financial supports to 6 media persons in a function held at Guwahati Press Club on September 14, 2012.

7 Mar 2012 - 2:59am | editor
A senior official of a Chennai-based firm has been missing since Sunday from near Kaziranga National Park. According to police, Ganapat Kumar, a project engineer of Afcon Infrastructure, went...

24 Nov 2015 - 7:24pm | Dibya J Borthakur
KMSS leader Akhil Gogoi has urged the people to unmask Congress government in the state and Narendra Modi government at the Centre alleging that the common people have been bearing the brunt of a set... 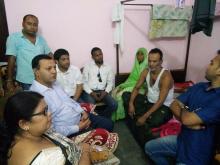