Assam Chief Minister Tarun Gogoi on Friday sought more tribunals to detect and deport the Bangladeshi immigrants from the state. During his meeting with Union home minister Sushil Kumar Shinde on Friday in New Delhi, Gogoi told Shinde that the state lacks adequate tribunals to detect Bangladeshi immigrants. According to him, the cases pending before the tribunals are huge in number and that more judges are required to expedite the process. Before that Chief Minister Gogoi submitted a set of guidelines for updating the national registrar of citizens before Shinde. 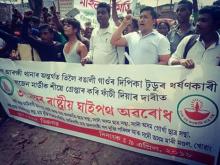 4 Feb 2018 - 1:22pm | AT News
GUWAHATI: DoNER minister Jitendra Singh said the global investment summit in Guwahati will bring the entire Northeast into the world focus which opens new gateways of trade within the region as well...