Morigaon police have arrested a police officer in connection with a number of sensational cases. Identified as Bhaktiran Kakoti, the suspended police officer was arrested from room no 306 of the games village complex in Guwahati in the wee hour by a team of Morigaon. Kakoti has a number of criminal cases pending against him in several police stations. He was suspended a couple of months and yet he openly criticized the DGP. 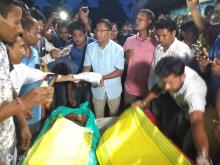