Several media persons’ organizations have expressed their concern at the increasing trend of unprovoked attacks on journalists on duty in Assam. They were unanimous while condemning the attacks and threats on the media persons during the day long Assam Bandh on August 28, 2012, called by All Assam Minority Students' Union and other organizations, which turned violent in various places.

The dawn-to-dusk Assam Bandh, which was followed by another 12 hour long general strike called by Bajrang Dal on the previous day, demanding President’s Rule in Assam resulted in the clashes between the supporters and general people. Moreover, media persons on duty were targeted by the Bandh supporters in Barpeta, Barama, Goalpara, Chamaguri and Tejpur.

Four Assam based journalists’ organizations came out with strong reactions against the attack on media persons during the day long Bandh. In separate statements, Journalists’ Forum Assam, Electronic Media Forum Assam, Assam Photo Journalist Association and Assam Union of Working Journalists have urged the authority to nab the culprits immediately.

“Several journalists were attacked by the supporters of Assam Bandh in different parts of the State. Amulya Nath of News Live channel was brutally attacked by AAMSU supporters and his camera was also snatched away by the miscreants. Similarly four other journalists were attacked by Bandh supporters in Barpeta, Barama and Marigaon. In another incident a news paper delivery van was set to fire by miscreants in Tezpur,” stated by a released signed by Rajib Bhattacharjee of Assam Photo Journalist Association.

The statement of Journalists’ Forum Assam added that the media has to play a responsible role in the time of crisis. The forum has urged the newspaper and news channel editors to perform its duty with utmost care such that the situation does not turn more violent in the coming days. 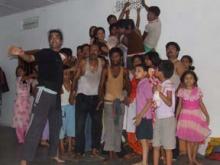 21 Aug 2007 - 11:04am | dbaruah
There are a serious of cultural workshops and events being organised at Balipara. With the help of some diligent cultural workers of the district the memorable cultural day of Kalaguru Bishnu Prasad...

12 Apr 2019 - 11:37am | AT News
Kokrajhar: A Bihu dance workshop was organsied at Rashmela field in Kokrajhar to impart dancing skills among performers in the area. A good number of performers participated the workshop, which...