Two more persons were killed and another injured in a fresh incident of violence in Dhubri on Wednesday.
The incident took place when unidentified miscreants shot dead two laborers working in a brick kiln at Bangaldoba in Dhubri district. 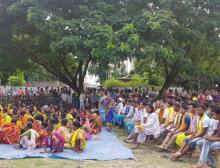