One died on the spot while another took on heels under the cover of darkness this evening at the heart of Udalguri town at about 6.30 pm. This was informed by the police to the media persons. According to the information, the two suspected miscreants came face to face with the regular patrolling team of security persons and opened fire at the security persons.

In an exchange of fire, one unidentified miscreant died on the spot while another managed to escape under the cover of darkeness. In the encounter, a police person also got injured and he has been rushed to Udalguri civil hospital who was further reffered to GMCH for better treatment.Meanwhile, the police recovered a pistol from the possession of the deceased and a motor bike (AS 27, 3561) used by them. The miscreant was yet to be identified.Thaneswar Malakar,DM udalguri in the mean time banned pillion riding in the district till I-Day.

29 Jan 2012 - 1:54am | Anup Arandhara
The All Assam Mamoni Bora and Dulu Hazarika memorial invitation day-night prize money badminton competition held at Gaurisagar on January 27 concluded. The winners of this competition are, Rajib... 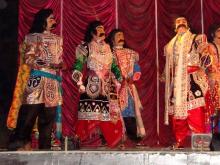