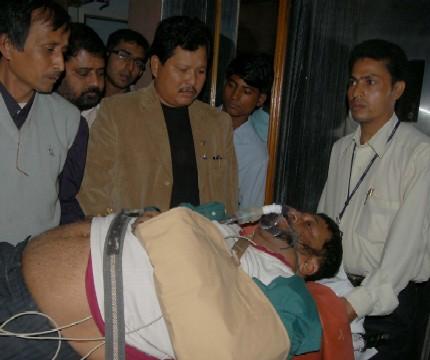 Asom Gana Parishad general secretary and former Union steel minister Birendra Prasad Baishya was seriously injured at a car accident in Silchang under Nelie police station in Marigaon district on Friday at eleven in the morning. Two people died and several others injured in the accident.

The accident took place while an Indigo car had its head on collision in Silchang with the Tezpur bound car where the AGP leader Mr Baishya was on his way to Tezpur with his two escorts.. The driver and a passenger of the Indigo car died on the spot. The deceased have been identified as Jyotish Chandra Baruah and Reha Chandra Boro.

The seriously injured Mr Baishya was later rushed to the Guwahati Neurological Research Centre. He is said to be out of danger.

The other injured people have been shifted to the Guwahati Medical College Hospital. Their injuries are said to be moderate. Various organisation and individual have wished their early recovery.

25 Mar 2012 - 12:13am | Ritupallab Saikia
The suspense over the abduction of businessman Kailash Ginoria came to an end with the recovery of his dead body at the tributary of Mikang River in Lungsang Basti under Bhandari Police Station...