The National Human Rights Commission on Wednesday issued a notice to the Assam Government asking for a detailed report on the riots in BTAD areas. In a letter, the Commission has asked the chief secretary to inform about the arrangements made for relief and rehabilitation of the affected people and the financial assistance given to the victims. The Commission has also decided to send its own team to study the arrangements made by the State Government for rehabilitation of persons affected by riots. The team has been given four weeks time to submit report to the Commission. 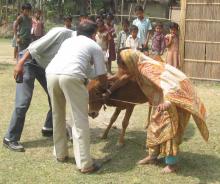