The CPI(M) has accused Dispur of a huge failure in firmly dealing with the situation to stop escalating violence in Assam. It asked the government to take immediate steps to restore law and order. In a statement, the called the failure a monumental one of the Congress-led Government. 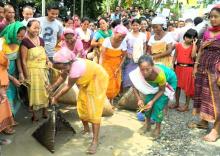 10 Oct 2017 - 6:05pm | Prantik Deka
The tag line of the film says it all, "A father, a daughter, and a book store...The Curiosity Shop". Independent filmmaker Shankar Borua's widely anticipated new film The Curiosity Shop opens in...