Braving incessant rains that lashed the city for several hours, hundreds of people in Guwahati, took out a huge procession to show register their protest and anger against the role of government, police and the media on the recent molestation case. Protesters representing several organizations thronged Dighalipukhuri on Sunday and took out a rally demanding immediate arrest of all the culprits involved in it.

KMSS leader Akhil Gogoi said that the NCW members were to visit the protesters but they reportedly left the city.
The protesters demanded action against police for their alleged delay in coming to the aid of the people and action against a journalist of a local news channel for allegedly instigating the attack. 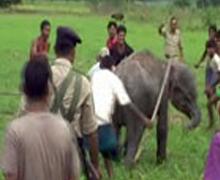 10 Apr 2014 - 7:20am | AT News
Amid tight security repolling is going on in five booths in Jorhat Lok Sabha constituency on Thursday.The repolling began at 7 in the morning where the voters are waiting to exercise their franchise...
Follow @Assam Times