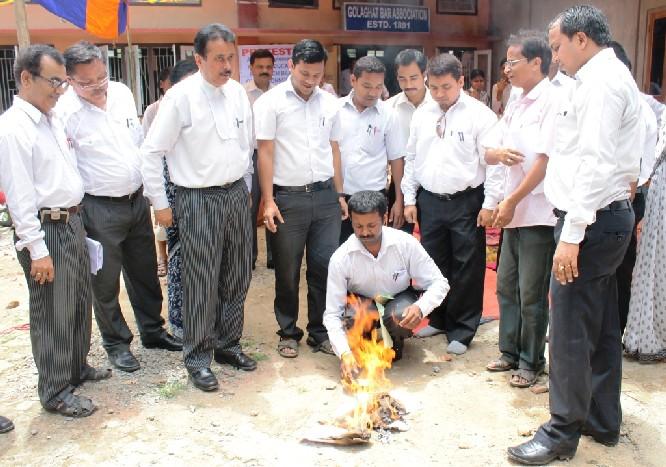 Lawyers across the state joined their colleagues in other parts of the country by responding to the Bar Council of India's call to protest against the government's Higher Education and Research (HER) Bill on Wednesday.
It will continue on Thursday also. Hundreds of lawyers gathered at the premises of the Gauhati High Court, which is currently on summer vacation, and burned copies of the bill. Similar protests were also reported from other parts of the state. The BCI had given the two-days' protest call, beginning, against the HER Bill, accusing the government of trying to usurp the power of advocates' apex statutory body to regulate the legal education and profession in the country.

2 Jun 2014 - 7:28am | Jayanta Kumar Das
Child scientists of Kalaigaon block have won five out of six awards in the district level science based competition held at Udalguri HSS on May 29. The competition was organized by Udalguri district...

2 May 2011 - 12:06pm | Manoj Kumar Das
Bitten by the annual spring fever and the romance of the season, the Assamese community, spread all over the National Capital Territory of Delhi (NCR) gathered in large numbers with their families...