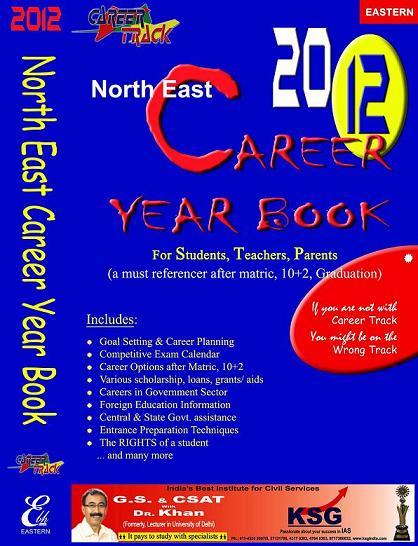 The much awaited Career Handbook of Northeast got unveiled in the city today at the Guwahati Press Club, Ambari. The first issue of this one and only Yearbook got released in the august presence of Prof.Ramananda Das, Secretary of the Assam Employment Council. The renowned Eastern Book House(EBH) are the prestigious publisher of this handbook. This publication adds yet another feather in their long lists of quality books.

In the very first year of its launch, The Northeast Career Yearbook 2012 already got nominated in the India Education Awards 2012, Delhi. Its blue print version has been widely appreciated and acknowledged at the national level by the scholars and academicians alike in the 2nd National Awards on Excellence in Education organized by Franchisee India and Bloomberg UTV in association with the country’s oldest and leading publisher S.Chand Group. The national nomination of the book itself speaks volumes about the quality content brought in by the various eminent scholars and professionals who contributed in the making of this book.
The young team at Career Track led by Prof.Anubhuti Dutta along with Zakirul Alam, Ranjan K Baruah along with others unveiled the first edition and presented it as a gift for the students of the region. They also committed free distribution of 500 copies of this yearbook for all outgoing Higher Secondary and Graduation students of the region. The team comprised of students representatives, teachers and professionals across all northeastern states. Speaking on the occasion, Mr.Ranjan K Baruah author cum social activist stated that the students of the region remain bewildered at what options to choose after higher secondary and graduation. As career information is few and limited students of the region fail to explore the various modern alternative career options.

This yearbook aims to answer that particular issue. Prof.Anubhuti Dutta, further added that this yearbook also gives a window information on the available education opportunities that exists within the region. Prof.Ramananda Das, who is also the Vice Chairman of ASCARD Bank, summed up the discussion with the statement that – ‘education without employment/career culmination is futile’. He stated that majority of the youth of the region remain unemployed because they are unskilled. And that they are unskilled/untrained because during their learning years they remained ill-informed about the alternative career options that are available. The team along with Mr.Vijay Sharma, Associate Partner from EBH, thanked the honourable Governor Mr.J.B.Patnaik for his invaluable support and inspiration in this endeavour for which the project could see the light of the day. They also thanked the education department for their support and also assured that the said book would be made available in the libraries of every government college of the region.
This is indeed a much needed information piece that has been brought out for the students and parents of the region. The book is available at the nearest book stall and is already one of the best seller at flipkart, India’s largest online shopping portal for books. It is appreciable that a local in-house publication is able to make its mark at the national level through sheer quality and content.

Gogoi claims all round development

27 May 2012 - 1:00pm | editor
Chief Minister Tarun Gogoi said Assam has developed on all fronts. In his address at the anniversary function at Sarusajai function on Saturday, Gogoi said that the state now ranks in third position...

26 Jul 2017 - 12:26pm | AT News
Petrol and LPG might not reach the people of Assam along with the other north eastern states if the Assam Petroleum Mazdoor Union resorts to an indefinite strike fromThursday reiterating a slew...