11 Sep 2015 - 9:57pm | SK Hasan
Noted historian and leading citizen in Nazira Akhil Paniphukan passed away on Friday. The end of the 90 year old Paniphukan came in the wee hours at his own residence in Nazira town. He is survived... 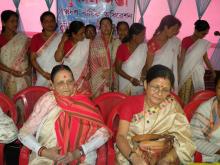 Woman urged to protect their rights