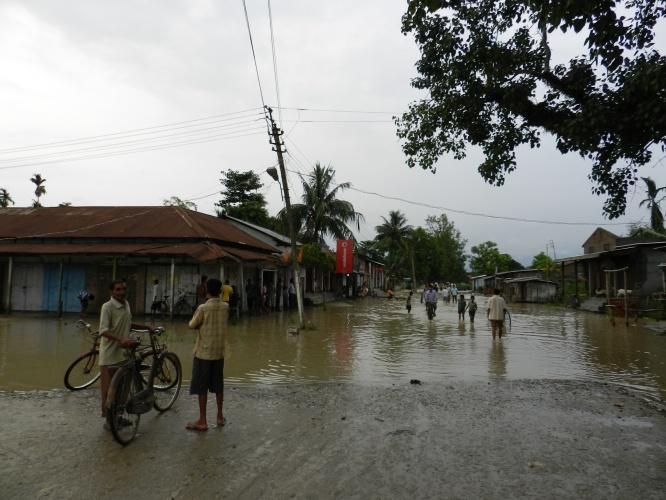 The over flooded Noa river has created havoc in Kalaigaon Revenue Circle area submerging more than 30 villages including Kalaigaon town. At least 20 thousand people have been effected. Four feet deep flood water has disruptted normal traffic at several places on PWD roads namely Mcanzy Road,Kulsipar – Moromichowk Road etc. Non completion of embankment at Noa river at Gerua and Sagunbahi has been the cause of the severe flood as told by villagers. Badly hit villages are -Gerua, Sagunbahi, Bholabari, Bhehguri, Beltoli, Rupatol, No.7 Kalaigaon of Kalaigaon town. Flood waters have submerged several places of Kalaigaon town including Kalaigaon Town LP School and Kalaigaon IB. Kamal Prasad Sarma,Mouzadar, Kalaigaon who toured effected villages with this correspondent said that non completion of embankment at Gerua and Sagunbahi near river Noa had been the cause of sudden flood at Kalaigaon. Unfortunately no public representatives have so far visited Kalaigaon to the dismay of effected people.

14 May 2008 - 1:28am | editor
The Government Railway Police (GRP) today recovered brown sugar weighing over 1 kg from the possession of three drug peddlers in the Kamakya Railway station, Guwahati this afternoon.According to GRP...

BJP to contest in 40 seats

6 Mar 2015 - 6:36pm | Hantigiri Narzary
BJP is going to contest in all 40 seats in the upcoming BTC council election without any alliance partner. This was declared by senior BJP leader and Sorbhog MLA Ranjit Das while addressing the...