Properties worth Rs 50 lakh along with some important official documents were reduced to ashes when a devastating fire broke in the office-cum-residence of Upper Assam Commissioner in Jorhat district on Sunday.
The fire broke out in the residence of the first floor of the bungalow of Iftikar Hussain at Cinamora following a shortcircuit at around 12:15 pm and soon spread to the ground floor where the office was located.

Official documents along with furniture and other valuables have been damaged in the fire though the resident staff managed to escape. The extent of damage was yet to be ascertained. 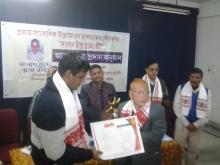 2 May 2014 - 5:15pm | Hantigiri Narzary
BPPF party demanded a high level inquiry into the serial killing at Balapara village late last night and punishes the involved culprits with the incidents. Rabiram Narzary, president of BPPF and...

16 Jul 2007 - 4:39am | editor
Mumbai : Sunita Bhuyan, daughter of famed violinist, Minoti Khaund has been carving her own niche in India’s cultural and corporate world. Bhuyan has been performing in various functions and...