Three prominent tea growers' bodies have sought power minister Pradyut Bordoloi's intervention over the halt in tea production in five districts of Assam.
The production came to a halt on Thursday in Tinsukia, Dibrugarh, Sibsagar, Jorhat and Golaghat following non-supply of gas by the Assam Gas Co Ltd to the tea estates. Most tea factories in the five districts, which also account for about 45 percent of the total tea factories of Assam, run their Dryers and Weathering Troughs on gas supplied by AGCL.
The gas supply has been disrupted due to a 72-hour blockade by Assam Tea Tribes Students' Association (ATTSA) demanding a Rs.100 crore package from the company for the development of tea community and 30 percent reservation for posts of grade IV employees for local youths in the firm.

Trader shot at in Guwahati city

17 Jul 2012 - 12:35pm | editor
A leading businessman was injured at an incident of shoot out in Guwahati on Monday. The incident took place at 11 at night at Fancybazar where the businessman Rajesh Paul was on his way back to his...

16 Jul 2012 - 3:03am | editor
Braving incessant rains that lashed the city for several hours, hundreds of people in Guwahati, took out a huge procession to show register their protest and anger against the role of government,... 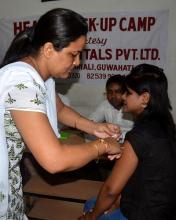