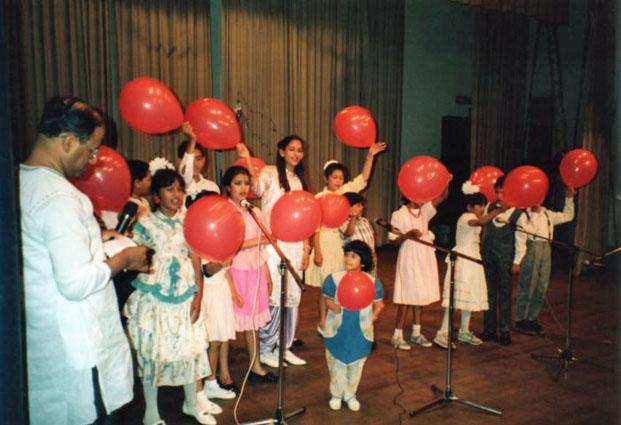 MORE THAN two decades ago a dozen children – aged between 3 and 10 – crowded on to a stage waving red balloons as they sang as part of London's Rongali Bihu celebrations.

Almost 25 years later, some of those same children -now fully grown and some married - reprised that performance of 'Ronga Balloone' at the Silver Jubilee of the London Bihu Committee - the group that has been organising the UK capital's bihu gatherings for all that time.

That performance on Sunday 6 May at The Campion School in Hornchurch was the climax of a cultural programme that had been crafted specifically to mark 25 years of unbroken celebrations in London for Rongali Bihu.

Dr Neera Borkakoti -whose son Jayanta and daughter Nandita were among the Ronga Balloone singers - said that the performance typified what celebrating bihu in London was about.

"It shows the active and enthusiastic participation of the second generation British Assamese whose main introduction to bihu has been through these annual celebrations," explained Dr Borkakoti. "It shows how important bihu is, as through it the second generation has bonded and are proud to say 'Ami Axomia'."

Rita Kakati Shah, who was also one of the Ronga Balloone ensemble, made a speech on behalf of the younger generation to pay tribute to those who have ensured there has always been a yearly event.

"We, the second generation, have 'lived' the London Bihu Committee over the last 25 years," Mrs Shah told the 150-strong audience. "Our experiences go beyond reading and writing Assamese and singing and dancing; we've grown up together because of it, developed lifelong friendships and can truly say we are an extended family."

Mrs Shah's tribute followed, what some bihu-goers dubbed "the centre piece of the Silver Jubilee celebrations" - a 12-minute film edited by Alfred Ahmed, another original Ronga Balloone participant. The film included some of the highlights from the 24 bihus that came before this year's function.

The video encompassed memories from traditional performances such as Husori to what has become known as the Bihu Olympics: both of which featured again this year.

Dr Khogeswar Lahon, who delivered this year’s bihu message, said the film captured the essence of the annual event: “The celebration of Rongali Bihu is unique, colourful and vibrant with a feeling of joy, feasting, merriment and enthusiasm everywhere.”

And Dr Nilmoni Sikdar, who narrated the feature, said it showed why holding bihu in London is so important to those who are part of the first tranche of Assamese to come over to Britain.

"After a quarter of a century in a distant land - far, far away from our land of birth, which is the same for some young people who have come in recent times - it means that we are ensuring togetherness," explained Dr Sikdar. "Although most of us were not related by blood and marriage, we remained a close knit unit of friends.

"There have been challenges but we stood - and stand - united in words and deeds."

For newcomers to the London Bihu Committee, the Silver Jubilee video gave them a sense of what the community they are part of has been doing to stay a "close knit unit".

Zaved Chowdhury, who joined the London Bihu Committee this year, said: "During the film, I found out that the Committee used to hold an Assamese Sunday School to teach those born in the UK about Assam - from its language to its culture.

Mr Chowdhury added: "The committee has not only managed to preserve our rich cultural heritage and our deep Assamese Indian roots but also motivates us and pass it over to the next generation.

“The third generation is already much motivated to attend the next event thanks to the medals and certificates they received for taking part in the Bihu Olympics and also through being entertained by a magician who armed them with balloons as well as party bags.”

Those of Assamese origin were not the only people to attend the Silver Jubilee event. Dr Helen Walker and Dr Pauline Taylor, who spent many years working in Assam, were among the revellers.

"It was a great surprise to see so many people and lovely to meet them," said Dr Walker. "We particularly enjoyed the excellent dancing and seeing the children learning various elements of the rich Assamese culture. In a way it made us homesick."

After a packed schedule of entertainment, the Silver Jubilee ended in what has become tradition at London Bihus: with a general bihu dance and Bhoj, which was catered by the highly-acclaimed Shirin's Tandoori.

Geeta Borooah, the president of the London Bihu Committee, summed up the general feeling of bihu-goers: "This year is a big year for the UK as the Olympics are being held here and it's the Queen's jubilee - which is why it feels apt we're celebrating 25 years of our committee.

Mrs Borooah added: "The London Bihu Committee started with just a few families and our numbers have been growing each year which we hope will continue so the essence of why we started this annual event can continue.

"That essence is ensuring future generations do not forget - and learn about - their roots and that in a united community we can all be there to support each other."

State gears up for National Games

30 Aug 2014 - 8:07pm | AT News
Only three months are left. Preparations are afoot to hold the 36th National Games in Kerala. The Assam contingent is gearing up to steal the show. Official sources told Assam Times that the...

Reshuffle on the cards

23 Jul 2014 - 9:15am | AT News
Chief minister Tarun Gogoi is set to reshuffle his cabinet in a day or two. Sources told Assam Times that Gogoi is ready to seek an appointment with Governor JB Patnaik for his consent to...