Power crisis to improve by Saturday

The power crisis that paralyzes Assam is expected to be partially over from Saturday evening. Chief Minister Tarun Gogoi said that the restoration of one of the transmission towers damaged by storm in West Bengal was on. He said, ''One unit of the two damaged towers is likely to be restored and will start functioning by Saturday evening but full restoration will take a few more days.''

The current power crisis in the state has been due to unforeseen natural calamities, he said adding Power Minister Pradyut Bordoloi has personally rushed to the spot to oversee restoration work.

Unavoidable situation at Barpeta regarding the training of presiding officer

13 Apr 2009 - 10:16am | Juthika Das
An unavoidable situation arose at Barpeta regarding the training of the presiding officers and polling officers to maintain no.6 Barpeta Lok sabha constituency According to report said that the... 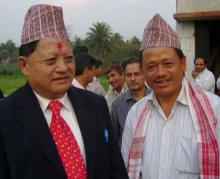