Family members of victims of NIA cry for justice

The Family members of victims of the National Investigation Agency case no.01/09 and no.02/09 have expressed serious concern over the delay in releasing the accused persons on bail who have been languishing in Central Jail, Guwahati Since 2009 for nearly three years.

The family members on condition of anonymity to this correspondent disclosed that the most of the accused persons under the NIA Case No.01/09 and No.02/09 had filed appeal petition before the Hon’ble Gauhati High Court seeking bail under section 21 (4) of the National Investigation Agency Act, 2008, but unfortunately, the Judgment orders are yet to be delivered even after elapsed of mandatory period of the ninety days. According to the section 21 (2) of the NIA Act, 2008 the Hon’ble High Court has to dispose of the appeal petition within a period of three months from the date of admission of the appeal. Therefore, it is according to them that the saying” Justice delayed is justice denied” which is prevailed in their cases.

The family members while interacting with this correspondent argued that what was the problem of releasing on bail to other accused persons such as political leaders, Govt. Servants, and contractors/businessmen who were still behind the bar? Whereas the main accused persons of the same NIA Cases who were extremist leaders were released on bail. Therefore, keeping them under confinement without relieve on bail amount to violation of article-21 of the Indian Constitution, the alleged. However, they were confident and hopeful that they would get justice from the Judiciary to avail the relieve on bail of their incarcerated persons. 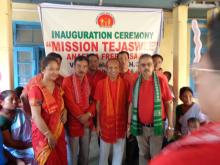 3 Oct 2015 - 3:56pm | Hantigiri Narzary
Kokrajhar on Saturday vows to prevent anemia along with other parts of the state with a mission. BTC principal secretary Dr Anupam Roy opened the Mission Tejaswee-Anaemia Free Assam at a programme in...