At least two people were killed and 25 others were injured in a road mishap in Barpeta district on Wednesday midnight.

The incident took place at Garhchuk near Bajali when a wedding bus skidded off the National Highway. The bus on the way to Simala-Bajai Bhethua, when the driver of the vehicle lost control and fell off the highway. The deceased duo were identified as Irak Bodo and Shukra Barman, died on the spot and 25 others were injured. The injured people were rushed to the hospital. 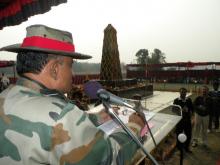 17 Jul 2016 - 5:53pm | AT News
The monsoon woes refuse to die out on Sunday when incessant rains resulted in the swallowing water levels of the Brahmaputra and its tributaries. The surging waters have been wreaking havoc in 15...

6 Oct 2014 - 7:55am | Hantigiri Narzary
Sankar Janmutsav was also celebrated in Kokrajhar along with other parts of the state to mark the birth anniversary of the saint. The Kokrajhar Sankhardev Sangha celebrated the day with four day long...