Stunned by the High Court directives on the secret killing reports, Dispur is holding talks with legal experts to tide over the Catch-22 situation and to ensure a hassle-free proceeding for Thursday’s Assembly session.

“If an acceptable legal option fails to come up on Wednesday evening, the government will not be able to table the report on secret killings during the Mahanta regime. Submission of the Justice J N Sarma Commission report along with the Action Taken Report as per the court directives is not very easy right now,” say sources here.

The court, however, rejected Mr Mahanta’s plea to reject the findings of the Saikia Commission report but observed that if the petitioner was not happy with the commission, he could approach the appropriate forum for redressal.

Notably, the government was getting ready to table the Saikia Commission report on Thursday.

Recently, Chief Minister Tarun Gogoi observed that he found it horrifying while he was going through the report. He maintained that without the knowledge of the man in power, these killings could not have taken place.

Talking talking to reporters former Chief Minister, Prafulla Kumar Mahanta came down heavily on Mr Gogoi and charged him with violating the spirit behind the inquiry by making the findings public. 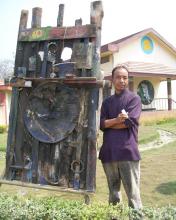 21 Mar 2010 - 1:29pm | Aiyushman Dutta
Have you ever wondered whatever happens to the huge amount of waste material that is dispelled by each household in Guwahati every day? Once the waste is disposed, we hardly stop to think about it,...

13 May 2014 - 8:33am | AT News
A lower court in Jorhat district has issued an arrest against a Congress MLA in connection with a case where he assaulted a policeman last year.The Titabor Subdivisional Judicial magistrate AK Baruah...