Traditional hunting of small wild animals,birds,rodents,amphibians has posed a serious threat to ecology of the state. Such traditional hunting by groups of villagers belonging to a few community has now been considered to be a biggest threat ecology of the state. Unaware of conservation activities,ecology or global warming these groups armed with iron and rope traps, catapults,bows and arrow venture out in the morning to be returned next day.They travelled many villages, forests,ponds,rivers and paddy fields looking for anything like snail, frogs, squirrels, mongoose,snakes (including pythons),birds including owls and adjutants,foxes,jungle cat,hare etc .They capture or kill anything which come on their way.They generally sell some of the captured items and consume remaining ones.

No organisations in the state,including Forest,WWF,Aranyak etc have so far yet taken any initiative to make these people understand the evils of traditional hunting. On March 3 this year,a few nature loving people of Udalguri district noticed such a small group of traditional hunting people with bags full of caughts at Bhatikhana Chouk (Kalaigaon) at 8 AM. Nature lovers immediately informed Habibur Rahman,Officer-in Charge of Kalaigaon Police Station. A team of policeman headed by Nakul Barua arrested three people namely Akhar Daimari,Surendra Baglary and Binoy Daimari with equipments including 10 iron traps. Police also rescued a badly injured jungle cat (Hepa),a bags ful of frogs (Bamun Bhokeli) and eels (Kusia). When contacted the DFO of Dhansiri Forest Division,Udalguri said that a few species of frogs (rescued species) had also been declared as protected animal under wildlife act of India recently. A few leading Bodo and Adivasi people told this correspondent that a section of people living in the remote villages never knew anything about conservation. They must be taught the evils of destruction of flora and fauna.”It is time our people changed their out look and understand the necessity of conservation nature and wildlife”,they said. Nature loving people of the district request forest,police,WWF immediately to launch schemes for the creation of awareness among such people living in the villages.

30 Mar 2015 - 7:34pm | Hantigiri Narzary
Campaigning from various parties and oragnisations for their candidates has been gaining momentum in Kokrajhar district along with others districts of the council to the sheduled April 8 BTC election...

7 May 2015 - 7:58pm | Nava Thakuria
A week long blood donation camp has been organized at Gauhati Medical College Hospital (GMCH) in Bhangagarh, Guwahati-32 from Friday. Initiated by the office of GMCH  superintendent, the camp is... 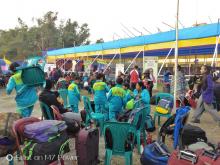