Addressing people there Dinamoni Das,Charge Officer,Kalaigaon Revenue Circle requested people to cooperate with the enumerators (data entry operators) who would be visiting houses to collect socio-economic data.He also asked people to give accurate data for a correct national register. Nearly five hundred people attended the awareness meeting. It is worth mentioning that another such awareness cycle rally was in Lakhimpur village under Kalaigaon Revenue Circle (Darrang Zilla part)in the last week of February this year. The members of the cycle rally distributed leaflets, posters,banners etc as part of the awareness campaign.

Health and the city

11 Nov 2007 - 5:33am | Rituparna Goswami Pande
They say “health is wealth” but in Assam “ill health means drain of wealth”. The people of Assam seem to have lost their faith in the medical facilities and treatment provided... 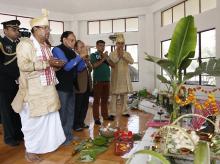