A stunned Cachar district administration discussed the situation prevailing in the Bhuvan Valley Tea Garden after reports of starvation deaths.

Chief Minister Tarun Gogoi has asked additional Chief Secretary P K Choudhury to to conduct an inquiry into the alleged starvation deaths. Joint Director from health department Dr Bijoylakshmi Das who visited the affected tea garden said in the meeting that mostly aged people have died and many residents of the garden were suffering from malnutrition.

The garden administration refused to divulge the name of the owners of the estate and the Additional Chief Secretary issued directives that the names of the owners should be immediately provided. 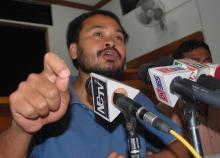 14 Jun 2016 - 5:57pm | AT News
THE REDEEMER, an English novel written by Dr Sanjib Kumar Borkakoti based on the life of Srimanta Sankaradeva was released on June 11, 2016 in Nagaon Press Club, Nagaon. The novel was released by Dr...