Frequent late running of trains like Barak valley, Cachar Express, Agartala Express and Hill Queen along with unjustified detention of these trains in several stations caused serious concern among the travelling passengers of entire southern Assam, Tripura and Manipur, alleged the people of Dima Hasao district.

These trains running from Lumding – Silchar and Lumding – Agartala and vis-à-vis, most of the times become late due to unauthorised detention in undesignated station for the reasons best known to the operating authority of the N F Railway. On February 29 the Down Agartala express was cancelled and the Up Agartala express was 19 hours late. The Barak Valley which left Silchar at 8.30 am reached Lumding at 11.20 pm covering a distance of only 219 km causing immense inconvenience to the travelling passengers. This train was detained first at Katakhal for one hour, from Badarpur it left at 12.30 pm then it was detained at Maibang, Mupa and at last at Manderdisa just before the Lumding station for more than 45 minutes.

The condition of Hill Queen, a train which runs in-between Lumding- Lower Haflong to connect with the Jansatabdi is more concerning. Actually this train was introduced to get connection of Jansatabdi at Lumding but due to such unjustified detention in several stations, the passengers of this train often missed Jansatabdi and face untold sufferings.

When the Assistant Station Master at Manderdisa Sri J. Ahmed was enquired about the cause of such detention of the trains, he disclosed that he has been serving there for 7 years along with all these problems ‘see my telephone is not working, there is no alternative means of communication with Lumding, the HQ. If you have some thing to say, why don’t you talk to Lumding or the HQ? Nothing could be done if you talk to me. Ahmed further disclosed that during his 7 years of stay at Manderdisa he has been facing such problems many a times. He could not assure when the people of this area could be relieved of such sufferings. 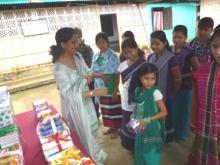 Army distributes stationary to under privelaged

17 Apr 2013 - 11:28am | Anup Biswas
Army unit deployed in Maibang assisted by Headquarters 22 Sector Assam Rifles donated stationary items and a cheque of Rs.7000 to the under privileged children of Kalyan Ashram, Maibang on Tuesday.... 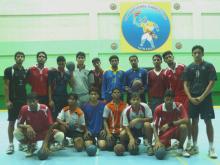