At least five people sustained injury when suspected ULFA exploded a powerful grenade in Guwahati on Tuesday. The incident took place in front of the Assam state BJP office in the busy Zoo Road at around 6-10 in the evening. According to eyewitness, the grenade was hurled from inside a Tata Sawari leaving at least two persons injured who were rushed to the GMCH. The injured people include a auto driver and a taxi driver. Top ranked police and civil officials have arrived in the spot and apprehended it an ULFA handi work. 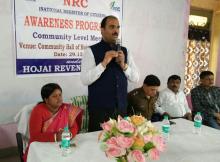 29 Dec 2017 - 2:17pm | Nikhil Mundra
HOJAI:The Hojai district administration has urged the citizens to remain calm on Sunday when the authorities would publish the first part of the NRC draft. Addressing an awareness meeting in the...

13 Aug 2018 - 10:00pm | AT Kokrajhar Bureau
Kokrajhar district administration organised a patriotic song competition on Sunday among  students at Commerce College in Kokrajhar.  The programme was inaugurated by Niranjan Baruah,...