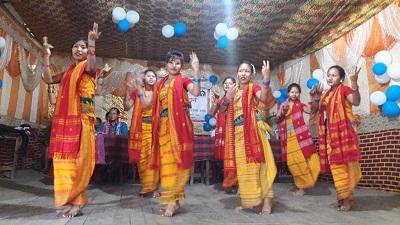 The 64th foundation day of Bodo Sahitya Sabha (BSS) the vanguard of Bodo language and literature was observed with a day-long programme on Wednesday at the auditorium hall of Bordoloi Bhawan, Tangla. The foundation day was organized by Tangla College unit All Bodo Students' Union (ABSU).

Rwisumi Khaklary Asst. Prof, Department of Bodo ,Tezpur College said,"We should be responsible in taking forward the mission of developmemt of the Bodo language. " Khaklary also stressed the need of promotion of Bodo culture to the globe.

21 Apr 2014 - 11:15am | Hitesh Kalita
Drumming up support for Narendra Modi, the NRIs from USA are organizing hundreds of "chai pe charcha" and many more campaigning events in the US and calling up people in India to influence voters to...