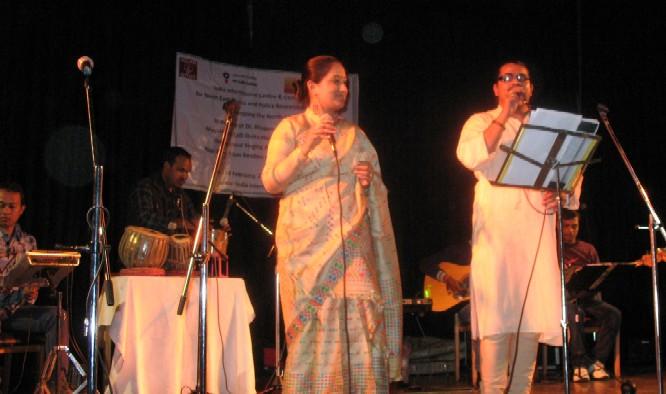 A set of spell binding performances by members of the late Dr. Bhupen Hazarika's family, the gospel-choir group, the Nagaland Singing Ambassadors, and the father of Naga blues, Rewben Mashangva, and his 11-year-old son Saka, from Manipur, lifted spirits and brought the rich sounds and enchanting melodies of the North-east to Delhi this evening.

Organized by the Centre for North East Studies and Policy Research at the Indian International Centre, the performancesto a packed audience began with an hour-long tribute to Dr. Hazarika by his nephew Mayukh and his wife Laili Dutta Hazarika who brought an ensemble of musicians from Guwahati and played some of the maestro's best known compositions, just three months after his passing.

They were preceded by Robin Kalita, a prominent amateur singer from Assam who holds a senior post in Indian Railways

Introducing the evening, Sanjoy Hazarika, Managing Trustee of C-NES, which organized the event with funding from Oil India Ltd and the Oil and Natural Gas Commission which paid for the professional fees of the performers and their travel etc, spoke of how Dr. Hazarika's music transcended the region and South Asia and that this was represented by the three performing groups:

"We want this to become a sustained road, a bridge that brings people and cultures together, improves understanding, so that rights flower and barriers fall."

The performance at the India International Centre had been preceded by an open air performance the previous evening to 600 persons, mostly youth and students, at Jamia Millia Islamia, by the Nagaland Singing Ambassadors directed by Lipokmar Tzudir and Rewben and Saka. That programme was organized by CNES at Jamia which is directed by Sanjoy Hazarika who holds the Saifuddin Kitchlew Chair at the University. The programme was launched by Mr. Hazarika and Prof. Rashid, Pro Vice Chancellor; the performances included dances and music from Manipur, Sikkim and the vigorous Bihu of Assam.

25 Feb 2017 - 8:12am | AT News
An intensive probe into the multi crore agriculture department is likely to send more officers to the jail. Some stunning facts seemed to have surfaced during the ongoing investigation where five...

2 Feb 2015 - 9:20pm | Dibya J Borthakur
A total 28 numbers of candidates filed their nomination papers for election to seven wards of Raha town committee on Wednesday. The candidates accompanied by large number of supporters arrived at the...