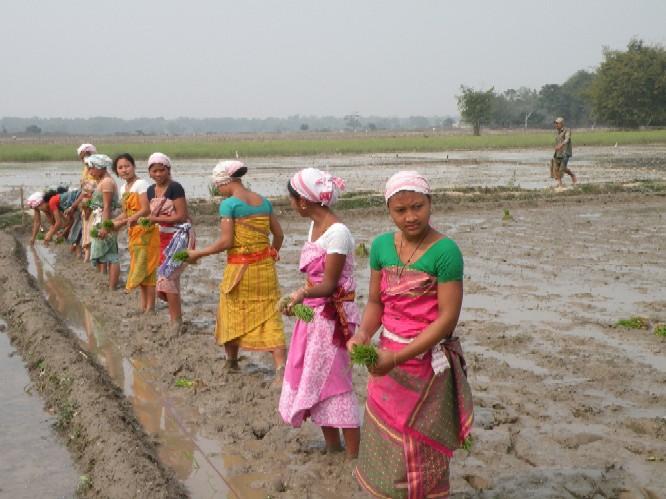 The plantation of Bodo rice in a plot of nearly three hundred bigha land under BGREI (Bring Green Revolution to Eastern India) scheme, has recently been inaugurated at Bhergaon on February 8. Daobiary Farmers Development Society (established in 2011) has undertaken the unique programme in association with agriculture department and BTC authority. The society with its advisor Manmohan Boro and Prafulla Boro; president Sabha Ram Boro have shown a very encouraging example of self sufficiency in the sub-division by cultivating various types of crops in a systematic way by using bio-fertiliser and bio-pesticide.The society also has grown potato in a plot of 60 bigha land at Bhergaon. Moreover a total of 6000 bigha land have been selected in the sub-division for Boro rice transplantation.

Ceremonial transplantation cum training on summer rice was held at the site.More than 40 young girls transplanted Boro rice as part of the programme before the inaugural meeting which was presided over by leading young farmer of Bhergaon Manmohan Boro. Kamali Basumatari,MLA,Paneri; Dulu Baruah,SDO (Agri) Bhergaon; Debojyoti Das SDO (Soil), Bhergaon and Kamal Choudhury,ADO (Dimakuchi) also attended the ceremony. 40 numbers of sprayer machine along with fertilisers and manures were distributed at concession rate among farmers in the ceremony. A vermi composite unit was inaugurated in the morning by Dulu Baruah SDO (Agri).This had been one of the ten such schemes being implemented in the sub-division so far.

28 Jan 2014 - 10:24am | AT News
An additional superintendent of police was among two were killed in an encounter with NDFB-S in Sonitpur district on Tuesday.The encounter took place at Batashipur in Dhekiajuli along the Assam-...

14 Aug 2010 - 2:32pm | pallavibarua
A decade back, when in my mid-teens, I went on a trip to Kameng in neighbouring Arunachal Pradesh. I knew that my generation had been very successfully indoctrinated with the concept of Indian...