The Assam Assembly is all se to hold its budget session from March 1. Governor JB Patnaik would address the session on its opening day.

Speaker Pranab Gogoi would announce the Report of the Business Advisory committee settling the Business for the Budget Session of the Assembly, 2012. On March 2 the second day of the session would begin with Question hour to be followed by Debates on the Governor’s Address.

Chief Minister Tarun Gogoi, who holds the finance portfolio would table the state budget on March 12. The House would debate the budget from March 13. A set of crucial bills would be tabled in this session which would be adjourned sine-die on March 30. 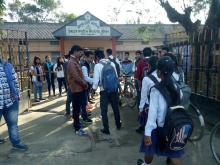 127th Bir Tikendrajit Martyrs Day to be celebrated at Hojai.