50 injured as train derails in Jagiroad

Dozens of people sustained injury when a passenger train jumped off the tracks in Jagiroad on Wednesday. The incident took place in the wee hours when ten coaches of the Dimapur-Kamakhya passenger train toppled from the rails leaving 50 injured. Of them, ten passengers have been critically wounded who are battling for life at GMCH. Details awaited. 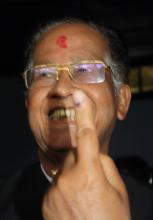 30 Jul 2016 - 4:15pm | AT News
Union home minister Rajnath Singh has wrapped up his stock taking visit to the flood-hit Assam on Saturday where 36 people lost their lives. Accompanied by minister of state for home affairs Kiren...