Once again Assam buys a bad name. Over 15 workers of a tea garden died because abject poverty within a short period of four months.

These have taken place at the Bhuban Valley Tea Estate a few months after the tea garden faced closure due to labour unrest.

The authorities have allegedly stayed away from providing medical treatment to the workers since October 2011.

The ten garden workers were lost their lives for lack of food and medical treatment.

The Barak Human Rights Protection Committee (BHRPC), a human rights group based in Assam, which carried out a detailed study on the pathetic condition of workers by sending a fact-finding team, found that there are dozens of workers still suffering from various sicknesses but never received medical treatment.

A fact-finding team found that the workers were only forced to work much more than stipulated working hours but also paid very low wages without being provided any medical treatment.

23 Mar 2022 - 6:50pm | AT News
Guwahati: After months of will-it-won’t-it, the state election commission on Wednesday announced the schedule for the Guwahati Municipal Corporation. The poll for the state’s largest urban local body... 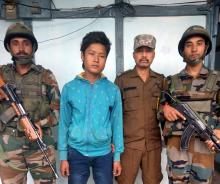 18 Feb 2019 - 8:30pm | Mithun Baruah
A hardcore NSCN(K) over ground worker was apprehended from Ratnapur District Changlang of Arunachal Prades on Monday morning by 9th Battalion of Rajputana Rifles. The apprehended NSCN(K) cadre is...