A woman committed suicide by coming under a speeding train in Halmira area of Golaghat today morning. The woman, identified as Forida Begum (55), a resident of Halmira, was ran over by a train near No.3 railway gate. Local people suspected that it happened at 5am when it’s slightly dark and in an area that people don’t normally cross. It is to be mention that Forida Begum has lost her husband 20 days ago and her sister also left her 2 days back and such cruel tragedy made her take such an extreme step.

3 of a family gets lifer for murder 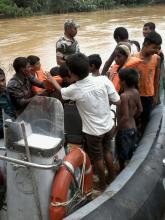 24 Sep 2014 - 8:05pm | AT News
The Centre has assured the Assam government of all help to deal with the flood fury that claimed 30 people during the last four days.In his telephonic conversation with chief minister Tarun Gogoi on...